I bought this Dutch 1962 Quickly L at on Online Auction (http://www.ricardo.nl/). It was a last minute decision, as I had no intention at all to get a NSU two-wheeler.  Most likely the problems with my 1200 C left me looking for something simpler and cheaper.

I bought this as a 1962 version at an online auction, but the frame-plate told me 1961 is the correct year.

From the pictures, I knew it was not in a perfect shape, but restorable, and thought the price was oke. But when I had it actually within reach, it was seemed abit worse then the initial looks had showen. I took it apart, to start the restauration.

I always thought the Quickly L’s had a cover over the handle bar, and had two-colored frames and covers, but I soon learned that some L’s where assembled in the Netherlands, and that the current configuration of my moped was correct, apart from the 26″ wheels, as the dutch L’s had 25″ wheel. But as the 25″ is very hard to get, most people use the 26″ version used on almost all other Quickly models. 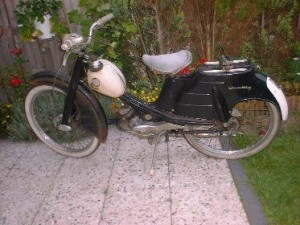