The car had been listed two issues in a row in the club magazine of NSU Club Nederland. I did not notice the classified until the second issue, even though there was a photo in both.

After calling the lady who owned the car, I took my father-in-law along to have a look (he’s been in [British] classic cars for years). We were surprised at the almost perfect state the car was in. It had been totally restored in 1998, and she had driven less then 4.000KMs with it. There were several very minor spots where something was off with the paint, and some small scratches on some chrome parts, but that was it !

The interior is original; the carpets and chair covers show their 35 years, but are hardly worn. Everything is there, and there were even two boxes of spare parts, an extra rear window, and an extra engine with it.

I did not have to think on this very long: this was a good buy.

If anybody has any information on the other owner(s) of the vehicle, I would appreciate a message! 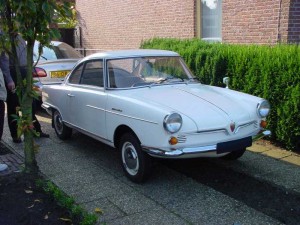 The first time the car had to go for the APK, the annual technical car review, like the english MOT or german TüV. The only issue was that I had to replace the rear breakfluid hoses, as one of them was completely gone.

It’s first [re-]appearance during a meeting of the NSU Club Nederland; it received great comments during the nieuwjaarsbijeenkomst 2001. Is seems the car was on a previous club meeting, back in 1984; it even won a price there, that was never collected …