Trouble on the way back

The next morning I was I no rush.  I had about 4 hours of safety-time in the schedule, and was planning to enjoy stopping at some of the interesting places I had seen on the drive in.  That never came to be, however …

After about 50km the rear started to feel wobbly.  Most often that is an indication of a puncture and slowly deflating tire.  But as I pulled over at a gas station (it was raining again) I noticed I had no less than four broken spokes in my rear wheel, all adjacent and on one side.  There was no way I was going to be able to drive the remaining 130km that way.

A nice gentleman walked over to me, and asked me if there was anything amiss.  After pointing to the rear wheel, he indicated there was supposed to be a bike shop about 2 clicks on, specialized in classic bikes.  So I drove over there, very slowly.

I was made very welcome at RJM Classic Motorcycles in Arlesey, Beds.  A nice cup of tea, and free use of the workshop so I could try and do some repairs. 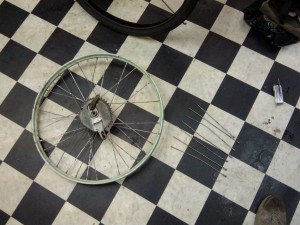 I rang Roger Worton, of NSU Quickly Spares UK, who was able to bring over two spare wheels, and a box of spokes.  We exchanged 7 (!) spokes on the rear wheel, did a haphazard alignment job (just good enough is still enough), and imitated McGyver to inflate the wheel with a bicycle valve and an air hose made for motorcycles and cars.  During the rush to pack I had forgotten to pack my transition set which would have made all combinations (car, bicycle/Dutch, or racing bike/French) fit.  We ended up using the rubber from the (broken) hand pump nozzle, inverted over the valve – a trick to remember!

Having lost about 2.5 hours in my schedule, I abandoned the site-seeing plans, and hit full throttle to reach Harwich in time.  On one of the A-roads I was driving on the hard shoulder when a particular large patch of pebbles showed up.  Where I would have moved to the main left lane on any time, I noticed the lorry coming up to me was having eastern Europe plates.  So I stayed on the hard shoulder, stood on the peddles, and took a loose grip on the handlebar.  And was nearly cut off by the trucker, causing me to go off-roading with 30+ km/h.  You can say all you want, but those Quickly drive very well – even the patched up real wheel survived this small adventure.

With 45 minutes at spare I arrived at Harwich, to the surprise of a touring car full of elderly Germans back from a garden tour.